This Saturday we will be taken back to relive the glory days at a Spike Island-inspired ‘house’ party via United We Stream with one hell of a Madchester line-up featuring Paul Oakenfold.

The Donnelly’s brothers – owners of streetwear brand Gio-Goi – have teamed up with United We Stream to bring a line-up which features the likes of K-Klass,Clint Boon, Vince Vega, Mike Tracey and headline set from Oakey himself, who played the iconic Spike Island gig back in 1990.

The DJ-and-producer will take music-lovers back to relive the famous Stone Roses gig in Widnes, spinning classics by the iconic Manchester group and their contemporaries New Order and the Happy Mondays.

The United We Stream stay-at-home party takes place on Saturday, April 18, from 6pm until midnight, with Paul’s set starting at 11pm.

We covered the launch of United We Stream a few weeks back and so far it has been invaluable in helping raise funds to support Greater Manchester’s nightlife scene and lifting peoples spirits since the coronavirus pandemic.

The original Spike Island event took place during the era dubbed ‘Madchester’ and was attended by 27,000 fans, and although we obviously can’t all be there in person, we’re sure the amount of people tuning in – going off last weekend’s Hacienda stream, viewed by over a million –  will surpass that number tenfold.

Head to unitedwestream.co.uk to stream the set. It’s free but you can donate to show your appreciation.

70% of the donations will go to support the Greater Manchester’s night time economy music venues, restaurants, bars, freelancers and cultural organisations who are unable to work or operate their businesses due to the COVID-19 pandemic.

The remaining donations will be split between Nordoff Robbins Music Therapy Charity (8%) and the Mayor Of Greater Manchester’s Charity (22%).

Stay safe, stay home, have a good time and do something good!

(p.s: If you love Paul Oakenfold, check out this interview we did with him almost 10 years ago for Skiddle!) 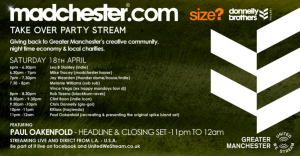