It’s been a week now since the first festival in 2 years, and that’s just about enough time for us to recover from the 3 days of amazing live music, pints and bloody good vibes. It’s safe to say Tramlines kickstarted the summer, and went out with a bang.

Weeks prior to the event, the announcement of Tramlines being a Government Research Programme was music to our ears. It confirmed that we were finally able to get into a field, listen to our favourite bands, and have a boogie together again- all without having to social distance. What bliss. And with the previous year’s event cancelled due to COVID, it was obvious it wasn’t just us that were itching to get out and dance.

The weekend began on Friday afternoon, where we headed to Sarah Nulty’s Main Stage to watch The Pigeon Detectives, Circa Waves, The Kooks and The Streets. The atmosphere was truly electric, with almost 40,000 attendees coming together after a long 18 months, ready to party and make up for lost time. It really was like nothing had changed, only everyone was in higher spirits than I’d seen in previous years. The Kooks brought the crowd together with nostalgic tracks from their iconic ‘Inside In / Inside Out’ debut album, of course playing hits such as ‘Naive’ and ‘She Moves In Her Own Way’. However it was Mike Skinner of The Streets that really got us going, playing earlier material from their 2002 ‘Original Pirate Material’, and selected tracks from their most recent 2020 album ‘None of Us Are Getting Out of This Life Alive’. In a predictable (but in a good way) ending, the night concluded with us throwing ourselves around to the classic ‘Fit But You Know It’ and ‘Take Me As I Am’. One each for both the Millenials and Gen-Z’s of the crowd. Talk about ending on a high. 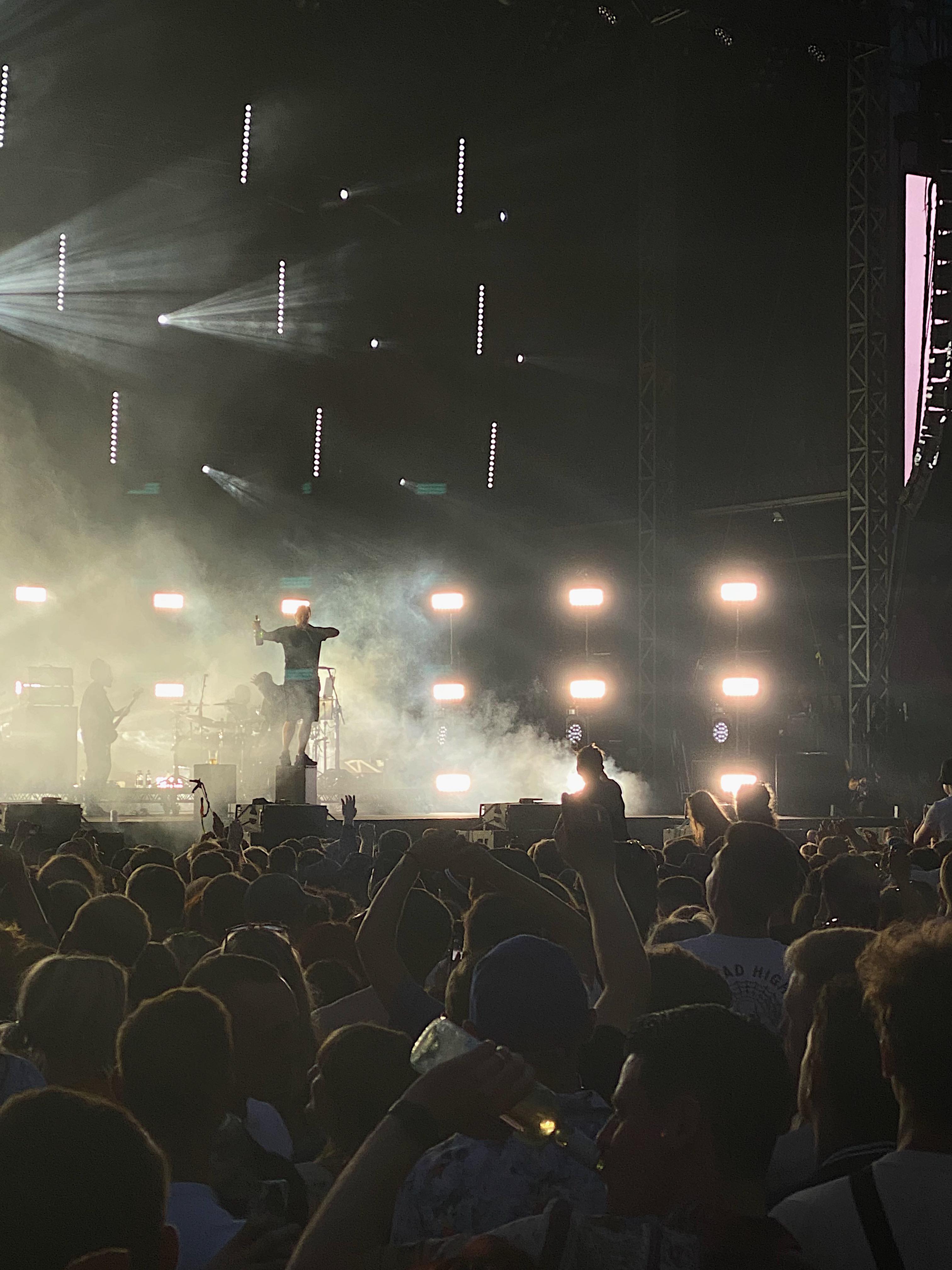 In true festival spirit, the next day we act in denial about our hangover, despite the fact it’s only day two, and get ready to take to Hillsborough yet again. Can you tell we’re not 18 anymore? The Sherlocks took to the main stage, a huge moment for the Sheffield based boys, followed by Blossoms and Royal Blood. Although gutted to have missed Little Simz on T’Other Stage (it’s always tough decision when two artists clash), Blossoms brought the good vibes, singing many tracks from their latest album ‘Foolish Loving Spaces’ but not leaving out the classics ‘Honey Sweet’ ‘How Long Will This Last’ and ending on ‘Charlemange’. However it was the cover of Sheffield legend Richard Hawley’s ‘The Streets Are Ours’ that was our highlight. A nice touch to the setlist.

Royal Blood closed the stage on Saturday, and it was a guitar heavy, head banging, mosh pit laden extravaganza that we were so hoping for. Mike Kerr and Ben Thatcher truly hit it out of the park with their set, playing a mix of their top 3 albums with bangers such as ‘Little Monster’, ‘I Only Lie When I Love You’ and their most recent hit ‘Troubles Coming’, the first track on their latest album ‘Typhoons’. The duo have grown phenomenally over the years. Their performance proves they won’t be going anywhere soon, and we are so glad. In fact we’re looking at tickets for their 2022 tour as we speak. See you in Manchester in April lads.

Now we always say we won’t over-do it when we go out out. But the Tramlines after party at The Leadmill was calling, and we simply didn’t have the willpower to say no. It’s been 18 months since being in a club, who can blame us? And Hair Of The Dog always works. Sort of.

The gorgeous sounds of Tom Walker were enough to draw us in. A lot of families had taken to the event for the day which was great to see too. There are plenty of stages, entertainment and independent food traders on site to explore, so there’s always something for everyone. As the weekend was nearing a close, Dizzee Rascal took to the main stage, amassing a huge crowd, and being one of the main highlights of the weekend. His energy got pretty much everyone on their feet, dancing to his old school grime tunes, and dance chart hits. There are simply too many good songs to name, but ending on ‘Bonkers’, playing it not once but twice, was something we’ll never forget. We won’t forget getting covered in beer either. It’s what moments like this are about; everyone sharing the same energy, dancing to the same feel good tune. Dizzee himself said it was something he was going to remember forever and we certainly will too. 18 months of lockdowns and hardship, forgotten. Just take a look at a snippet below. Unreal.

With the go-ahead for the event given just 5 weeks before show-time, the team certainly pulled it off. It was the weekend we had all been craving for so long, and gave us a taste of the amazing summer to come. We can only hope for many more years of Tramlines, it’s one of our favourite weekends of the year that never fail to disappoint. But if you want to get your hands on tickets for next year (yes, they’re released THIS early) you better be quick, as with the success of this year, it’s guaranteed to sell out.

Head over to www.tramlines.org.uk to grab yours early. You don’t even need to know the line-up before you buy, you know it’s going to be just mega.

About the Author: Sophie