London Fashion Week is known for showcasing and celebrating emerging designers. The city’s youth game is unmatched in the competing capitals, but there is also a brilliant tension between the experimental side of London Fashion Week and the establishment. Great British heritage brands, such as Burberry, sit alongside young upstarts, including Fashion East’s graduates. And, of course, there are the gatekeepers. The likes of Erdem, Christopher Kane and Roksanda, who are still holding down the fort at London Fashion Week, and consistently keeping the world’s eye watching the London fashion scene

.So what can we expect from London Fashion Week? We were asked by Glossy Pops to forecast the happenings that are not to be missed. Read on.

Kicking off on Friday the 14th of September, London will be host to the best designers the country has to offer. The city is taken over by the fashion pack until the 18th of September, designers filling Londons coolest and most exclusive venues. Somerset House is used as the main hub, with galleries including the Tate Modern and landmarks like the Oxo Tower also used.

London fashion week, in particular, has a reputation as the ultimate breeding ground for new talent and it’s the young ones who really run the show. Due to this, the shows are harder to pre-empt and make the unpredictability truly exciting. Take Richard Quinn, Central Saint Martins graduate had the queen on FROW!

What to look out for?

Following the departure of Christopher Bailey, Burberry will be unveiling their revamp with new artistic director Riccardo Tisci on Monday the 17th of September at 5pm. This is particularly exciting as in July a collab was announced with Vivienne Westwood to be debuted in December.

Victoria Beckham always presents in New York but due to her brands 10th anniversary, she will be showing on home turf on the 16th at 10am. 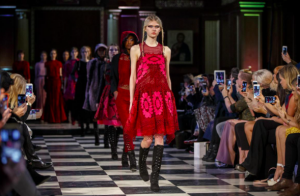 Iconic British labels and rising stars make for exciting viewing throughout the week, you can keep up to date here at Wam Social where we will be summarizing the week’s trends and highlights.