Thanks to their mutual interest in the intertwining of contemporary culture and traditional craftsmanship, Fred Perry & designer Nicholas Daley have teamed up for a collaborative release.

Both celebrate the various British subcultures which have existed in Britain, and simultaneously explore their intertwined connection with music and fashion.

Together, their strong links between like-minded collaborators cross paths on many occasions.

The George Cox name is synonymous with quality craftsmanship and British subcultural movements and has been reinterpreted in various items within the collection, one of which is an original design from the George Cox archive, the monkey boot is based on an early Czechoslovakian army boot and features the same 14-hole construction and side stitch detailing. 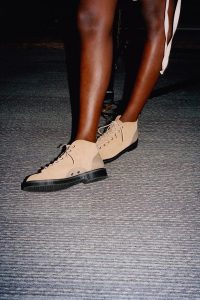 First adopted by British subcultures in the 1960s, today the monkey boot is just as tough and just as iconic.

The collection launches on February dropping in selected Fred Perry stores and online.