Home/Fashion/Chanel: The Show Stopper
Previous Next

It wouldn’t be the end of Paris Fashion Week unless the Grand Palais was transformed into another world by Chanel. The iconic fashion house lost their commander in chief of 36 years, Karl Lagerfeld just weeks ago, marking this show to be his last.

A/W 19 had an Alpine theme with the models walking down the runway through thick snow, to which they were advised to not wear heels but naturally, most did. There were spins on the classic two-piece, fairisle style knits and leather combos,Pops of colour were added through caramels, pinks and blues. Along with chic Chanel belted puffer and bomber jackets, it was the fleeced and fur, ground-skimming capes that really made a statement. 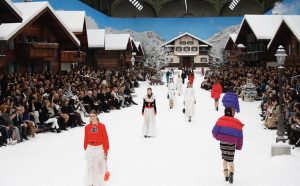 Muses Cara Delevingne and Kaia Gerber walked alongside Penelope Cruz, who carried a white rose in memory of Karl. The front row was awash with famous faces, Naomi Campbell and Claudia Schiffer sat beside Monica Bellucci. Julia and Carine Roitfeld looked tearful as a 1-minute silence were held on behalf of Mr Lagerfeld, with the quite being broken by his voice played out on a tannoy, the models wept as they walked in the finale of the show.

The legendary fashion house that Karl reinvented in the early 80’s is now in the hands of his successor Virginie Viard. Long being considered as his right-hand woman, the Frenchdesigner has been with the brand for three decades. With Viard sharing his vision many believe she is a perfect fit to lead and to continue his legacy. 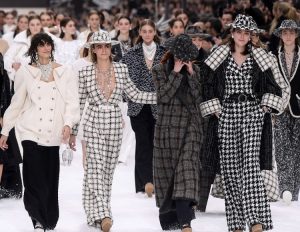