The countdown is on for Manchester’s biggest indoor festival – The British Sound Project – which takes place at Victoria Warehouse this Friday and Saturday.
Championing some of the best British indie and alternative rock bands, this two-day music extravaganza features a line-up of established artists alongside new breakthrough acts and hosted by Argh Kid who will combine an intoxicating mix of street-smart rhymes delivered with sharp wit and hilarious anecdotes. 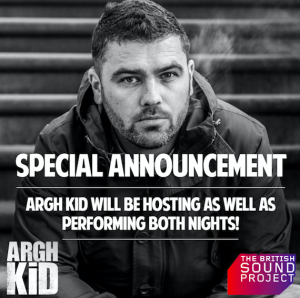 Â He had this to say:
“The British Sound Project discovered me through my work with Manchester United and asked me to perform as part of the line-up. After a conversation they suggested I host both nights, I jumped at the chance. Friday and Saturday will have different audiences, but I think both will appreciate my poetry. It’s going to be brilliant.”
The British Sound Project promises to be even bigger and better than its inaugural festival last year, which featured Primal Scream, Black Grape, Badly Drawn Boy, Eliza & The Bear.
The line-up for Day 1, (Friday 29 September) will feature Twin Atlantic, Deaf Havana, Mallory Knox, Band of Skulls (DJ set), Lonely The Brave, Fatherson, Sittin Pretty, Freedom Of the City and Partisan!
The line-up for Day 2 (Saturday 30 September) features White Lies, The Horrors, Toy, Foals (DJ set), Airways, White, New York Tourists and Ryan Jarvis.
British Sound Project co-organiser, Steven Wood:
“The British Sound Project is very much geared for a younger audience this year – especially students who have just celebrated Fresher’s Week and who’ll be looking for new bands and sounds.
“Most music festivals are outdoors – but we created a festival under one roof and without the mud! If you get a huge crowd into Victoria Warehouse listening to music – like we did last year – it’s amazing!”
Tickets are for via the TBSP website: thebritishsoundproject.co.uk
Lucky Manchester students can grab themselves a special discounted Â£20 ticket with the codes below.