Home/Fashion/A RECAP OF THE 2018 OSCARS
Previous Next

The glitterati of Hollywood came together last night to celebrate the 90th Academy Awards, the crÃ¨me de la crÃ¨me of awards ceremonies to champion the great and the good from the film world over the past year. 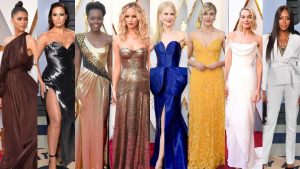 We were so excited to watch and see who came out on top and who clinched the â€˜Best Pictureâ€™ award, hoping that they actually had the correct envelope this yearâ€¦. (one of the best but worst Oscar moments, look it up for lols), but we were even more excited to see what and who would be worn on the red carpet.

In recent ceremonies with the #MeToo and Times Up movement, politics have ruled the red carpet with the A-listers wearing all black in solidarity or carrying a white rose in support of the movements but it was widely acknowledged that at the Oscars this year, the Academy didnâ€™t want politics to distract from the Movies and encouraged the attendees to dress in the usual Oscar style of dressing to seriously impress and that they did – but it is hard not to notice that the Times Up and #MeToo were still at the forefront and many women choosing very feminine but fierce dresses showing that they too, mean business at the most coveted event of the Hollywood Calendar.

There seemed to be a theme in what was worn, strong embellished superhero-esque looks from Jennifer Lawrence in Christian Dior; Lupita Nyongâ€™o in Versace, Gal Gadot in Givenchy and Sandra Bullock in Louis Vuitton, Grecian chic from Emily Blunt in Schiaparelli Haute Couture and Margot Robbie in Chanel Couture and gorgeously girly look from Saoirse Ronan in Calvin Klein By Appointment; Danai Gurira in Gabriela Hearst.