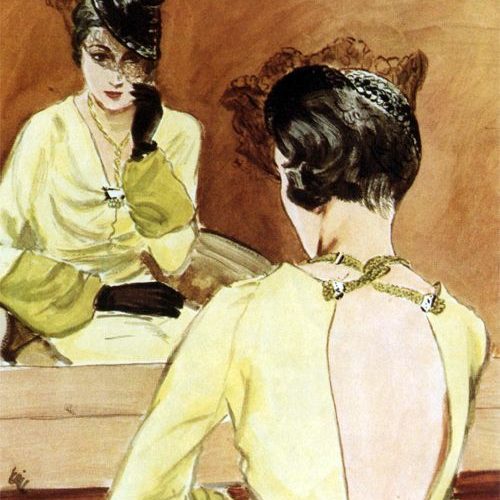 A few months ago I was fortunate enough to attend a fashion illustration workshop with Tracy Fennell. Held in a seminar room at my university, she constrained her artistic ways and attempted to maintain a decorous approach to her demonstrations; namely not painting the walls with the rainbow of colours at her disposal (which was a bit of a shame in all honesty)! She told us of her illustrious career, the necessity of illustrators as well as the decline in their importance. It is sadly morphing into an elitist discipline with the likes of Dior commissioning Fennell to paint their rich clients clutching their precious new bag, a marketing campaign that is as expensive for the company as it is stressful for the artist: set in a pristine room, she told us of her perching on a stool attempting to quickly draw her subject without making a mess, which was not all that successful at times.

There has always been a need to transcribe designs onto paper and to make it available to all, needless to say in recent times the focus has shifted to instant technology. The decline in illustrators runs parallel with the increasing commercialisation of the fashion industry and its new emphasis on instant results both on and off the runway. Fashion is swiftly losing craftsmanship and gaining commerciality more so with every year. This being said though, illustrators haven’t disappeared all-together there is simply more emphasis placed on photographs and social media than ever before.

In view of this, I’d like to take the opportunity to showcase the work of two of the greatest illustrators, who despite working in similar times had very contrasting styles.

Eric, or Carl Erikson, was born in New York but later moved to Paris which defined his later life and career. Often seen sporting a bowler hat and a walking stick, he was the epitome of elegance and sophistication which was a characteristic that translated in his work. Feliks Topolski, an expressionistic painter who was an official war artist during WW2, before he gained renown in peace through his depiction of the first UN meeting and who went on to be commissioned by royalty, said,

‘Eric’s draftsmanship impressed me: its unerring simplicity, unostentatious colour, its seriousness, as it were, toward his duty as a recorder of a scene or the shape of a dress.’

However, what really made him stand out was his attention to detail and belief in the depiction of life as it was, he drew exactly what he saw.

In 1935, he drew a striking cover for Vogue of a lady applying eye make-up: he uses clean lines and the utmost simplicity to create a minimalist masterpiece. Another drawing of particular note is a drawing he did for American Vogue in 1933 of a dress by Jean Patou, where he used a mirror to show the detail both at the front and back of the dress. 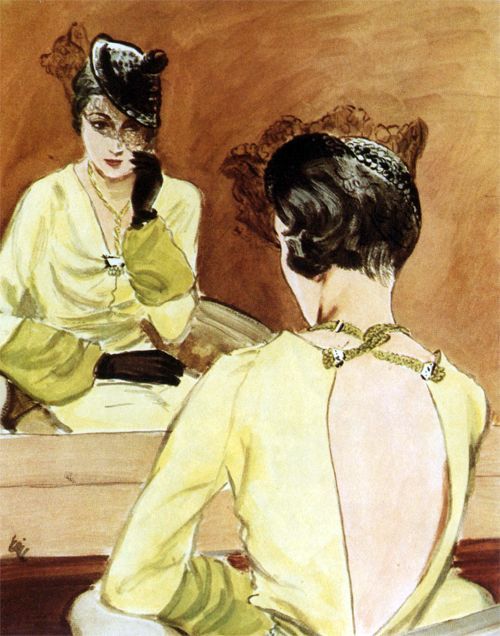 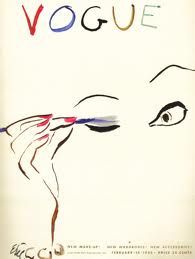 René Gruau however, focused on blocks of colour and bold lines inherited from Henri de Toulouse-Lautrec and whose work was more traditional that Eric. His most influential work was done for Dior an dJohn Galliano, a dress designer for Dior, said that Gruau ‘captured Dior’s style and spirit better than any other because he understood his long-term friend… for me a Gruau sketch captures the energy, the sophistication and daring of Dior, and equally is testimony to an enduring friendship.’

He contributed to the movements towards the modern fashion world, including great economic stimulation throughout a renewed focus of advertising by photography and illustration. His more famous work includes the 1949 Miss Dior campaign with lady’s hand delicately placed on top of a panther paw. 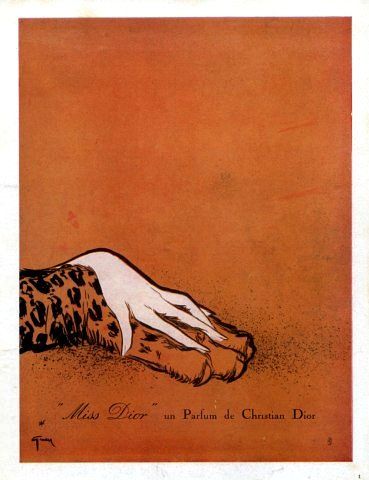 Illustrators attempt to encapsulate the essence of a brand or an outfit, as well as the person in it and it is for this reason that I hope the discipline doesn’t fade: a picture may be convenient but it is not the same as an artist’s eye attempting to capture the work of a fellow artist.