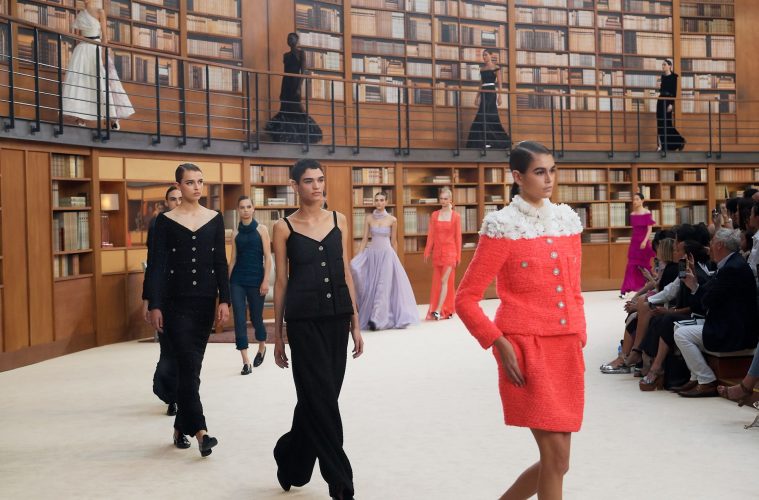 The calendars of English socialites have been bursting at the seams. This week welcomed Henley, Wimbledon, Hampton Court, Goodwood Festival of Speed, Glastonbury and other festivals, exhibitions and sporting events, not forgetting the Veuve Cliquot Gold Cup Polo. However, the ‘It’ event for all fashionistas is, of course, the Haute Couture shows. Unfortunately, if you’re like me and didn’t make the invite list, you’ve probably been keenly following the shows on Instagram or through the eyes of the ever-gorgeous Jeanne Dama who has secured numerous invites to the likes of Dior, Valentino and Chanel.

Whilst all the Haute Couture shows were of a particularly high standard, the debut of Chanel’s new fashion director was eagerly anticipated. The Grand Palais was transformed into a magnificent period library to exhibit Virginie Viard’s first haute couture show on Tuesday 2nd July. Although she and Lagerfeld were great friends and had worked closely throughout the past few years, with his sad demise, she took the reins and didn’t disappoint, fusing the classic and traditional silhouettes with a modern twist.

The hair and make-up were equally sharp and had an air of precise, austere beauty. Cat-eyes, strong brows and translucent skin was the work of Lucia Pica and the hair, created by Sam McKnight, was made up of low ponytails with clear, angular partings set on the left and right of the head, completed with satin ribbon. 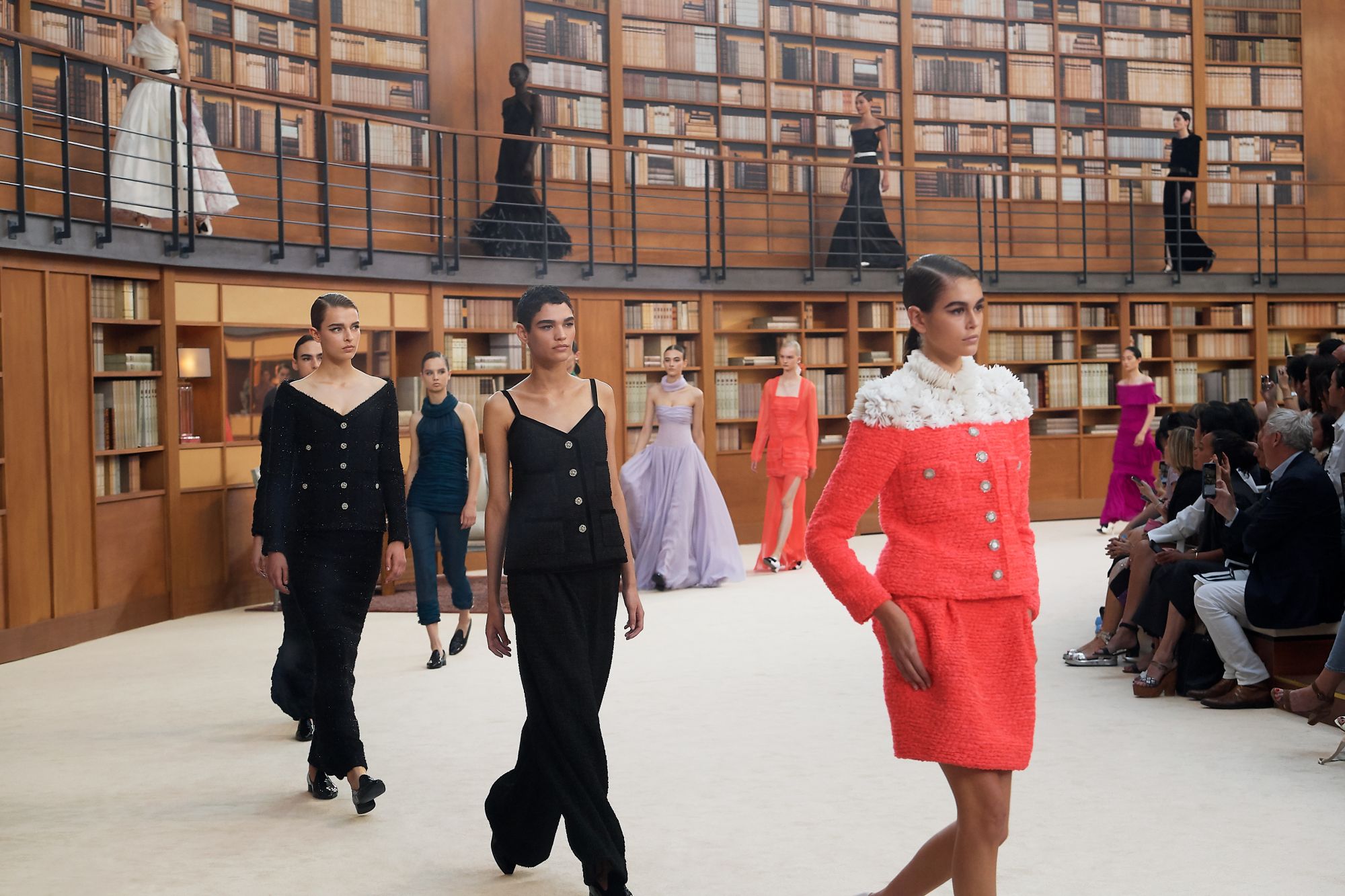 This collection has to be my favourite for a long time, the combination of the setting with quintessential Chanel cuts and feminine tailoring given a modern androgynous touch, embodied the move of Chanel onwards from the Lagerfeld era. I admired how Viard seemed to go back to Coco’s philosophy and vision perhaps leaving behind the futuristic ideas that Lagerfeld had.

Look 14: A matching tailored wide-legged trouser suit in a pink and black tweed material. Finished with large round, silver embellished buttons and puffed upper sleeves, the jacket allowed a white shirt to peak over the top in the fashion of an overlapping tall band collar. 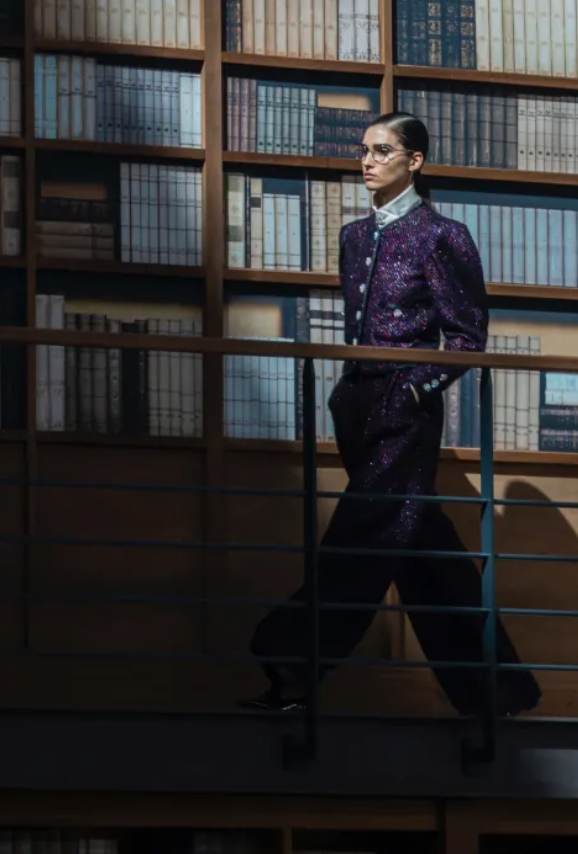 Look 34: This piece was almost minimalist in design and the mauve, chiffon full-length dress was perfect in its simplicity. It was finished with a matching scarf. 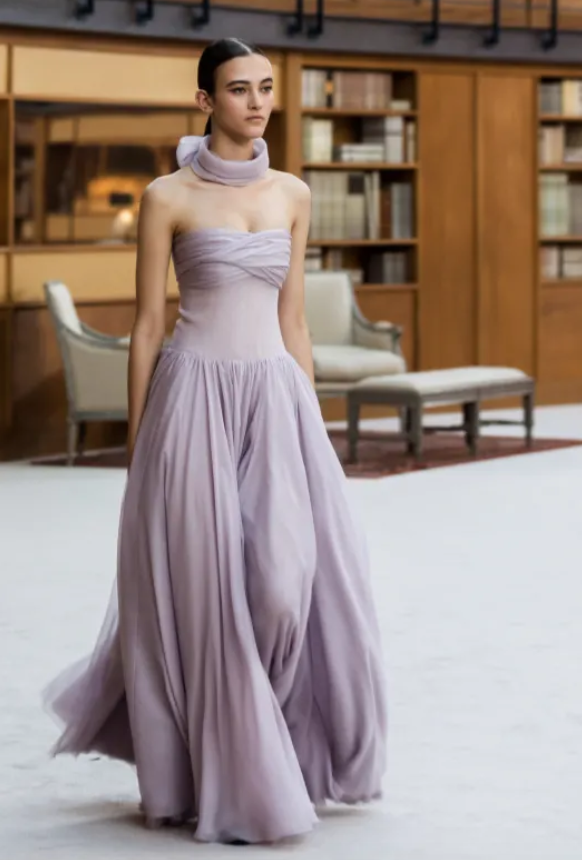 Look 43: The making of this look is mesmerising and really worth watching, the video can be found on Chanel’s Instagram. Each hand-sewn pink and white flowers looks near lifelike and seem to jump off the jacket and it was paired with an ankle-length skirt of metallic flowers on a black base.

Look 51: With a look reminiscent of the 1950s and a Disney ballgown skirt simultaneously, the white detail on the choker collar, the pockets and a belt contrats the deep plum of the sheer top and voluminous skirt. 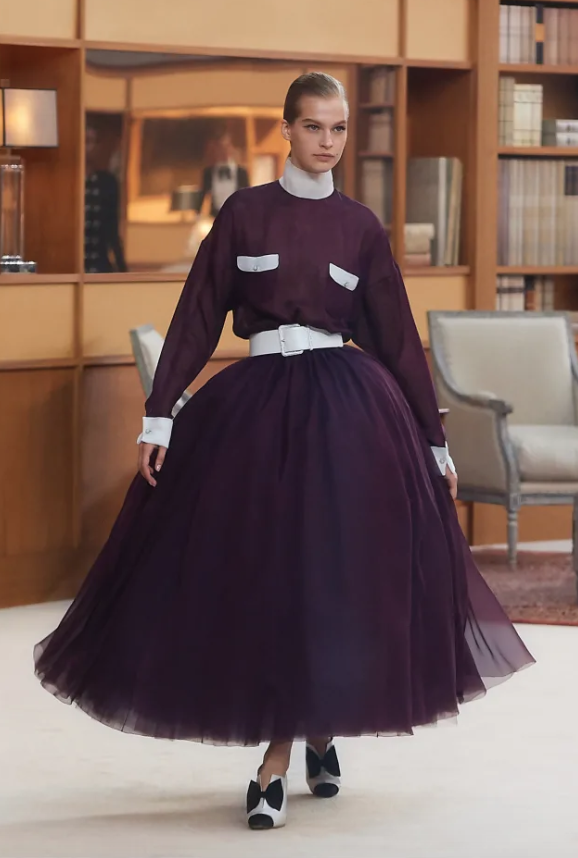 Look 54: This look harks back to the origins of Chanel, and a modern take on a dress that would be familiar to any who have watched ‘Coco avant Chanel’. A sharp white shirt front stands out against the deep black velvet that forms the flared effect of the small waistline widening outwards to the full skirt. The look was finished with white cuffs, an oversized satin bow tie and embellished silver buttons. 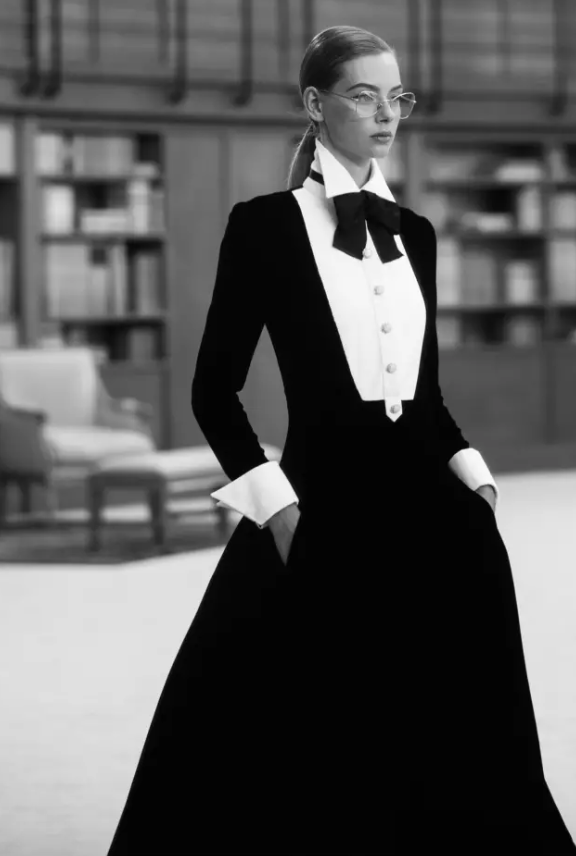 Look 61: A white shirt with buttons running down just left of the centre, that is both ruffled and has a ruffle! A white belt bites in at the waist before a mustard-yellow pleated full skirt takes over.

It was incredibly difficult to narrow it down to only six looks which is a tribute to Viard’s genius, so I eagerly look forward to the direction that she will take this infamous maison.