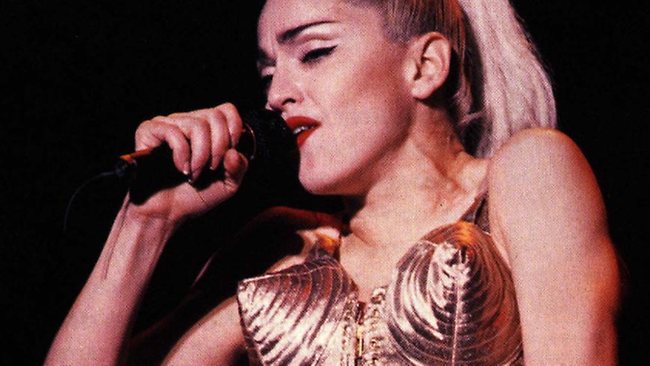 When writing about this utter legend, simply where do you start?

Her career spans decades, with scandal and controversy to boot, this woman has long reigned as the Queen of pop. Yes, she snogged the face off Britney and Christina at the VMAs and yes, she may have had very public spats with Elton John, Lady GaGa and Piers Morgan to name just a few. However, jaw-dropping these were, throughout her career the theme of expression has always stayed true.

She has been a voice for minorities, has been a beacon for gay and gender rights and has done relentless charity and humanitarian work. It was Madonna whose youth exploration in the Manhattan dance scene that brought Vogueing to the mainstream, she has also been leading lady in movies, publisher of books, curator of art, Kabbalah devotee and mother to six children. Collaborating with everyone from Bjork to Sofia Coppola, Pharrell to Vanilla Ice, Ozzy Osbourne to Mike Tyson… OH YEAH!

Over the years she has acted as a fashion darling, pin-up and muse to designers, photographers and creatives alike. She has not only set trends but has started them, with many of her fashion choices still being referenced in what we wear today. She has reinvented herself more times than we can sing “Holiday” and with each album, love it or hate it, has adapted her sound to climb the charts.

This woman has survived the hazards of a cape on stage (to which I’m quite sure that dancer shall never work again!), being chucked off a horse, twice! and most spectacularly has survived the test of time as a woman in an industry plagued with sexism and misogyny. Over time as we lose the Bowie’s, Winehouse’s, Franklin’s and Jackson’s of this world, we grow even more in love with our living legend Madge.

So much fashion history to list, including dressing as Jesus Christ, performing as a matador and dressing as a boy scout, here are a few chapters that we shall not forget…

We have Jean-Paul Gaultier and his 90s love affair with Madonna to thank for this smasher. Probably recognized as one of her most iconic looks and a stand out from this controversial tour. The tour in which the Pope actually got the show band in Rome after he called for a boycott.

In her edgy virgin bride ensemble, with a belt labelled boy toy, this look had a million future fancy dress nights in mind. With a slick of red lipstick, which is both tres Hollywood and dangerously provocative, it was always going to be a mainstay in the iconic looks hall of fame.

Trademark beauty freckle, a mass of blonde bombshell hair and dreamy cocktail dresses made up another style chapter for Queen M. She oozed red carpet glamour and those signature ruby lips were to stay.