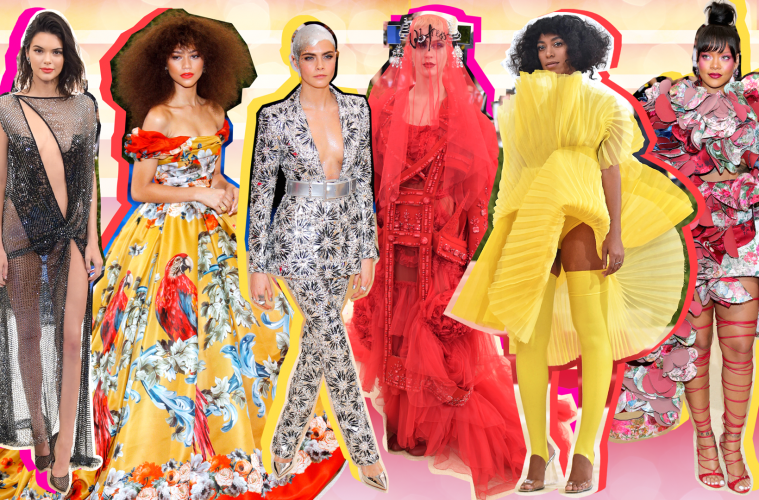 Jo6th May 2018
Fashion0 Comments 0
We recently got asked to delve into the Met Gala history books and pull together our fave ever looks for Glossy Pops. It was obviously a pleasure, and here is the outcome.
We’ve all heard of the Met Gala, but what is it?Â
The Costume Institute Gala at New York’sÂ Metropolitan Museum of Art is the biggest event on the fashion fundraising calendar. Founded by publicist Eleanor Lambert, the benefit was first held in 1948 to encourage donations from New York’s high society. In its modern incarnation, the most famous faces from the realms of fashion, film, music and art come together to raise money for the Met’s Costume Institute and celebrate the grand opening of its latest exhibition. The night is centred on the theme of the new exhibition.
The 2018 theme is ‘Heavenly Bodies: Fashion and the Catholic Imagination’ –Â featuring some 40 Vatican vestments and accessories spanning 15 papacies. Pieces which have never left the Vatican’s possession before will go on display alongside pieces by Coco Chanel, who was educated by nuns, John Galliano, CristÃ³bal Balenciaga and Donatella Versace, who is a sponsor of the exhibition.Â The Met Gala 2018 theme is being cited as the Met’s most controversial yet, owing to the positioning of these fashion garments alongside sacred artefacts
Since 1995, the event has been chaired by US Vogue editor-in-chief Anna Wintour,Â who enlists public figures to serve as the event’s co-chairs. Past hosts have included BeyoncÃ©, Taylor Swift, Katy Perry and Marc Jacobs. This year the Met Gala 2018, which marks the event’s 70th anniversary, will be co-chaired by Amal Clooney, Rihanna and Donatella Versace.
As we get excited for the 2018Â edition of the Met Gala, we look back on some of our favouriteÂ ever looks…