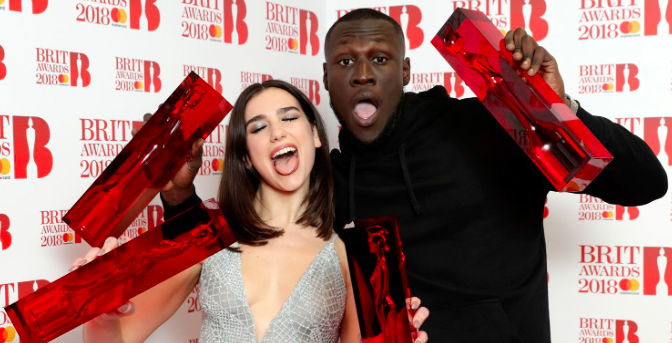 We headed to London for the BRIT Awards with our pals at Bag Girl and Glossy Pops and had an absolute ball. We brought you all the action live via Instagram and SnapChat, but just in case you missed it, here are our highlights!

JUSTIN TIMBERLAKE AND HIS CHOIR

Justin opened the show this year. Accompanied by only a guitar, Chris Stapleton and a dimly lit stage, the performance was stripped back which showcased the singer’s natural talent but for the finale of his track ‘Say Something’ as a choir of hundreds descended into the room to amplify the final chorus.

The Princess of the silver screen and the Queen of Pop were the first celeb guests to present an award. They both looked incredible as they presented Glossy pop fave Dua Lipa with the Best Female Award!

The ultimate Girl Power performance. Dua Lipa and her Glossy Posse stormed the stage in swimwear and synchronised moves to perform ‘New Rules’. They all looked fierce, strong and empowering and we wanted to be up there with them!

When Ed Sheeran performed ‘Supermarket Flowers’ people were ACTUALLY crying in their seats. Sign of a strong performance.

She seems to be making her way to many ‘front rows’ this week. Did you spot her?

Whether it was a big PR stunt or not, it was a pretty ballsy ‘in-your’face’ move when Liam Payne and Cheryl arrived arm in arm at the awards and took part in some uber flirty banter on screen. Maybe the news reports claiming that they are days away from splitting are wrong after all!

Her performance medley on that oversized pink stage before descending into a collaboration with Liam Payne was pretty special.

The nicest man in Rap and Grime sang us out as he sang a moving rendition on ‘Blinded By Your Grace’ whilst he got rained on (yes, rain!). He then launched into a freestyle where he criticizedÂ the British Prime Minister for her response to the Grenfell Tower disaster.

Possibly the best host the Brit’s have ever had. HE IS SO FUNNY!!!

Gary Barlow took to the stage mid-awards to pay tribute to the victims of the Manchester Arena attack. 22 poeple lost their lives at the Ariane Grande concert last year and despite Ariane Grande not being able to make it to the awards for a rumoured surprise performance, Manchester legend Liam Gallagher of Oasis was introduces on-stage by Gary Barlow. He performed ‘Live Forever’ as the crowd help up lights on their phones as a mark of respect making the o2 Arena look like it was adorned with starlight.