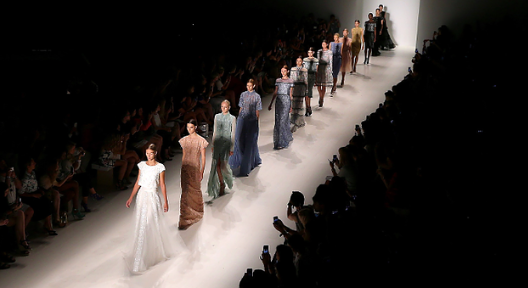 A WAM GUIDE TO NYFW

We are expecting NYFW (and all the major shows) to showcase a new look this year, â€˜Spring 2018 runways featured 36.9% women of colour and for the first time ever, every single show cast at least two women of color.â€™ Although the fashion industry still has a very long way to go, we hope to see far more body diversity, age diversity, and transgender representations across all of the catwalks this season.

Sending waves through the whole fashion calendar by announcing he will no longer have a show at NYFW Alexander Wang has decided he will present two collections a year in June and December to better coordinate with his schedule. Wang, who is known to host THE biggest after-party #WangFest is set to host his final February show in Times Square.

KAIA GERBER, ONE TO WATCH.

Kaia Gerber made a huge impression when she walked the Calvin Klein Spring 2018 show and from there she went on to WOW on the catwalks at London, Paris and Milan during her first ever Fashion Week season and most recently hitting the Chanel Haute Couture catwalk aged just 16. Sheâ€™s still one to watch this February as she cements herself as Super Model Royalty.

As a nod to Eugenia Kimâ€™s 20th anniversary, theyâ€™re is looking back on some of her most iconic headwear worn with a special retrospective presentation and capsule collection which will bring back some of the accessories brands greatest pieces. Â Expect to see hats worn by pop royalty back in the early ’00s as well as pieces worn by Britney and BeyoncÃ©.

In recent times we have seen a plethora of politically charged slogans emblazoned across A-listers threads to get their message out there, with the â€˜Times Upâ€™ and â€˜#Metooâ€™ campaigns still at the forefront of everyoneâ€™s agenda, designers may be seen utilising this platform to thrust their views and messages across to the masses. Watch this spaceâ€¦.

It is widely known that there has been a mass exodus of designers at this yearâ€™s NYFW, choosing this year to not have a traditional show at NYFW, opting for appointment only collection viewings or heading for Paris or London. Most notably weâ€™re missing Fenty x Puma, Delpozo and Tome, the latter two will pop up at London and Paris so keep your eye out as weâ€™re expecting big things.